After going solo for the past three years as the host and producer of the radio show “Sunday Simcha” on community radio WMNF 88.5 FM, Joy Katzen-Guthrie was joined on air last month by Rande Friedman, who will assist Katzen-Guthrie as co-host and co-producer.

“Sunday Simcha” was the first Jewish program to air on WMNF, starting in 1980, and has continued ever since. Since Katzen-Guthrie took the reins, the show has focused exclusively on Jewish culture and music. The show airs from 1 p.m. to 2 p.m. on Sundays.

“Rande will come and host the show on his own on days when I can’t be on the station live and will also join me on shows on occasion,” Katzen-Guthrie told the Jewish Press. Interestingly, Rande was my first guest at my first Simcha show in June 2019 when I took over the program, and he is deeply connected to the Jewish community in Tampa Bay and Central Florida and has many ideas wonderful for its programs, which will come from a point of view and interests different from mine. 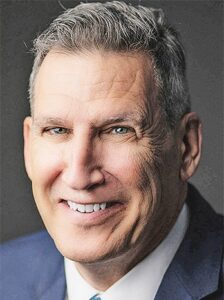 Friedman will host the second and fourth Sundays and Katzen-Guthrie will be in the studio live on the first, third and fifth Sundays. Both are volunteers.

Each host will bring their own flavor to the show.

Katzen-Guthrie features music from Israel as well as liturgical and Jewish music from singer-songwriters around the world. She also conducts occasional interviews with artists.

With a background in musical comedy and his easy-going nature, Friedman is expected to add another dimension to Sunday Simcha. Besides comedy, Friedman is particularly interested in the contribution of Jewish artists to American jazz, pop, stage and film music, Katzen-Guthrie said. He is also expected to add more interviews and community news when he hosts the show.

Friedman is best known in the Tampa Bay Jewish community for his creation of the Grand Seder held annually in Tampa. Seventeen years ago, he proposed the production of a Seder musical and immediately found support from friends. They formed a troupe, “The Kosher Hams”, and entertained thousands while raising money for the Tampa Jewish Family Service food bank.

Friedman says he was born in Chicago, but in true “kosher ham” style, he says that when he was 2, his parents “wanted to raise the family in bad weather, so they moved to Buffalo “. He worked in family shoe stores in Buffalo and then in Tampa Bay. After being in the retail business for 25 years, he became a real estate agent.

People can find current and past broadcasts and the history of “Sunday Simcha” at www.wmnf.org/events/sunday-simcha/

The old is gold: the exorbitant cost ...